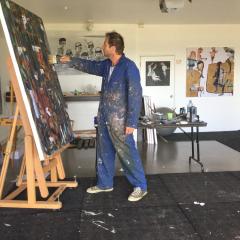 Born in Russia, emigrated to New York City in 1990 & exhibited there before moving to Australia in 2000. Lived/worked in Australia for 8 years. Since 2009 I have called New Zealand home. I love the feelings of awkwardness that my paintings project through a mixture of both naive brush work, stylization, and awkward situations. I've been recognized for my singular works combining text and figuration, and merging disparate elements of Russian iconography, re-inscribing strange and often obscured meanings into normative narrative structures reminiscent of comic strips and advertising. Emerging from behind the iron curtain, my paintings, and works on paper, capture the underlying forces that dominate and determine the conditions of the human psyche. In my latest works, I continue to expand upon strategies of collage, drawing, and painting that conjure earlier established themes and imagery mined from a myriad of sources including, movies, cult icons, literature, television, and my personal history. This broad range of historical references not only foreground my own interest in appropriating past visual and literary styles but also invokes the schizophrenic and pathological impulses at work in the Russian imagination. The use of color has played an increasingly central role in my more recent works, so has the formal concern for surface, space, and technique, resulting in densely populated and fragmentary images that further articulate my refusal to offer a conventional narrative.