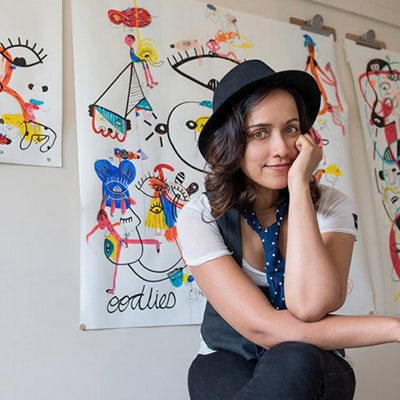 Joi Murugavell is known for her colourful, dark and humorous art as a means to finding escape (and then understanding).

Her work often investigates the intricacies or as she puts it “the trials and tribulations” of human communication.

She has exhibited nationally and internationally in London, Mexico and New Zealand.

In 2017 she was part of a performance piece called ‘Ask Me Anything’ where she sat next to a new body of work for two hours, while members from the Museum Of Contemporary Art Australia’s Young Ambassadors Club were invited to sit opposite her and enter into an intimate and open dialogue about her art practice.

In 2010 and 2017 her work was published in the Semi Permanent Book, a collective of art from all over the world, and three children’s books written by Bambi Gordon, published by Writegroup in 2012 and 2013.